Smoking Weed from a Hookah | PotGuide


I often take walks around my neighborhood in the Washington Heights area of New York City. There are beautiful, hilly parks that provide a bit of elbow room in an otherwise crowded place, and along the way, I pass plenty of hookah-friendly restaurants and bars.

In the COVID-era, restaurant seating has spilled onto the sidewalks and closed-off sections of the streets so it’s easy to get a clear view of people gathered around the hookah to laugh, eat, socialize, and reconnect. As it turns out, they’re just participating in a tradition that has been going on for more than 500 years.

Today, the hookah is most often associated with the consumption of shisha (flavored tobacco), ornate water pipes and long hoses, and those full white clouds of exhalation. Hookahs are definitely a niche part of today’s weed culture, showing up on college campuses, private homes, and in my neighborhood (and maybe yours) at restaurants and bars.

The hookah has a long and deep history, and the act of consuming weed from a hookah is not remotely new. Let’s dig in.

It is believed that the hookah originated in Rajasthan and Gujarat along the border of India and Pakistan. These hookahs were simply designed, typically made of a coconut shell base from which Indian noblemen would consume cannabis as hash. 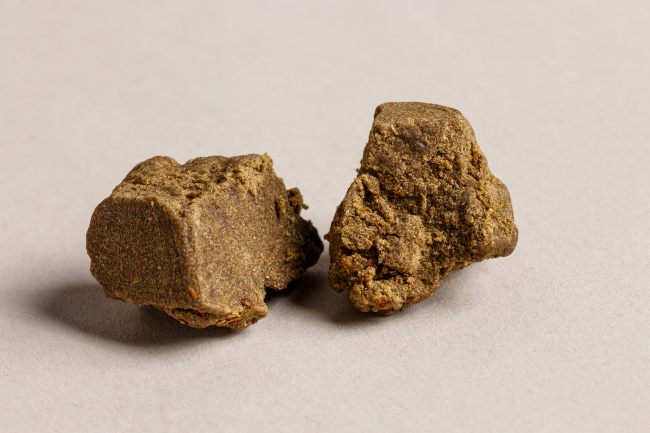 The act of consuming hash in a hookah dates back to over 500 years ago. photo credit

In this scenario, the name “hookah” is the derivation of an ancient word, hukka, meaning coconut. The hookahs that are more familiar to us, with the decorative bowls and hoses, are believed to have originated in Persia (modern day Iran), though the originals were likely made of wood.

Though you would never guess from its long history, in the Middle East and North Africa, smoking hash from a hookah remains a forbidden but communal activity (Islamic law forbids the use of any intoxicant). As hookah smoking gained popularity and moved across the world — from India to the Middle East, to Africa, Southeast Asia, and later to North America — the aesthetics of hookahs changed and the local names for it varied. Narghile, argileh, shisha, hubble-bubble, and goza to mention a few — but the construct was much the same as it is today: bowl, smoke chamber, hookah hose, and pipe. 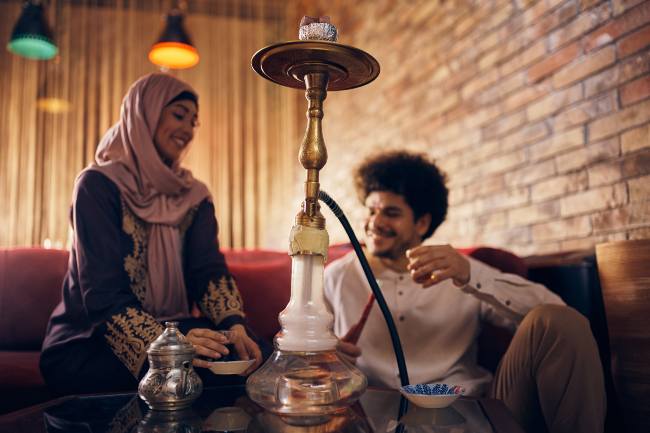 Modern hookahs come in a variety of sizes and are often made of stainless steel and aluminum, with silicone rubber as hoses and sometimes, changeable mouthpieces.

Smoking Weed From a Hookah

Tobacco was first discovered in the Americas thousands of years ago, but the introduction of tobacco into world markets in the 15th and 16th centuries may be the point where someone, somewhere along the line first thought of smoking shisha and cannabis together. However, who did it first is impossible to know.

Those who do combine shisha and cannabis may experience a different high from what they are used to. It could be buzzier, more sedated, or even one that gives a rapid heartbeat and induces lightheadedness. 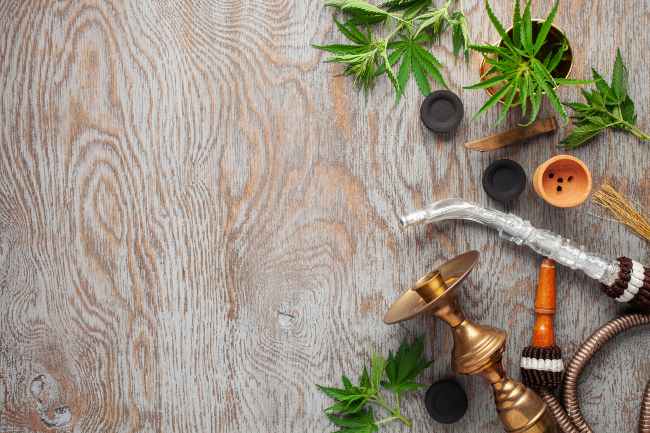 Some people refer to the combination of cannabis and shisha in a hookah as “dirty hookah.” photo credit

If you are new to smoking weed from a hookah, it’s typically suggested to follow the cannabis golden rule — start low and go slow. Assess how you feel before taking another long inhale. Additionally, if you are a consumer who prefers to avoid tobacco and its health risks altogether, hookah may not be your jam at all, unless you go with an herbal shisha.

Just like sharing a joint, smoking weed from a hookah is better with friends. There’s the act of preparing the hookah bowl, maintaining the coals, the pleasure of sharing, the white clouds of exhalations, and the company of people you like hanging out with.

What Do You Smoke Out of a Hookah?

You can smoke shisha (flavored tobacco), cannabis, and hash.

Does Hookah Show Up on a Drug test?

If cannabis is in your hookah, then yes.

Do You Inhale Hookah?

You bet. It’s suggested to take a long inhalation until the flavor from shisha diminishes.

Is Hookah Worse Than Cigarettes?

Perhaps not worse, but definitely not better. Smoking hookah carries many of the same risks of cigarette smoking, including the inhalation of nicotine, tar, and heavy metals.

Have you ever tried smoking cannabis out of a hookah? Share your experience in the comments!

How I Feed My Cannabis Plants On Day 26 & Day 44 Of Flower, Square 1 Genetics

Why Thailand will Distribute 1 Million Cannabis Plants to…

CBD – Everything You Ever Wanted To Know – The…

THC edibles that are legal in all 50 states

How to Start a Cannabis Business the Right Way –…

CBN vs CBD: The Differences Explained

Cannabis in India by CSC