Composting for Cannabis: How to Get Started | PotGuide.com


In the cannabis world, soil is largely regarded as simply a grow medium, one option among several, and is often considered less efficient or micro-manageable than hydroponic systems. But a few gallons of prime earth can carry an entire ecosystem with benefits that can’t be quantified by an NPK ratio.

Composting is the process by which organic waste like food scraps and garden trimmings are recycled into compost, a soil amendment rich with nutrients, living microbes and beneficial fungi. The decomposition process is driven by microorganisms that feed on organic material, breaking it down into its atomic components like nitrogen, phosphorus, calcium, and more. These elements are suspended in fibrous black humus that looks like dirt which can then be mixed into soils, spread as a top dressing, or used to make compost tea for watering or a foliar spray.

In this article, we review what compost is, how to make compost, and how compost can benefit your cannabis grow.

Composting has a myriad of benefits for any household, even if the product isn’t fed to plants. According to the NRDC, over one quarter of landfill trash is food and garden waste. Removing these contributors from the waste stream eases the burden on landfills and incinerators, and reduces waste management costs. 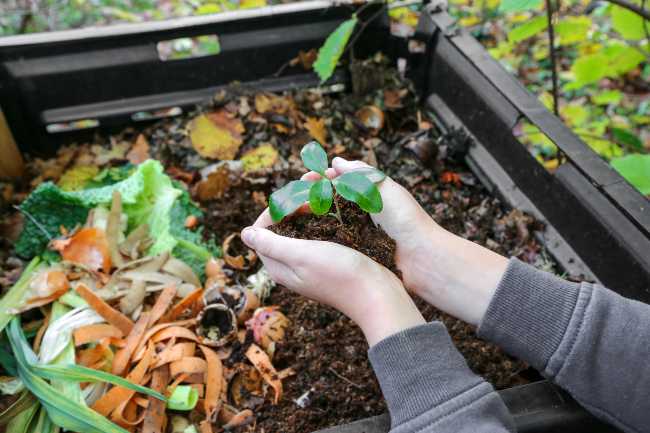 There are many benefits of composting, including the reduction of greenhouse gas emissions. photo credit

Compost is also rich with microbial life capable of turning dead topsoil into “living soil” prized by organic gardeners. Living soil contains microbes and fungi that work symbiotically with the plant through root systems. Some of these microbes, like rhizobacteria, break down larger or inaccessible nutrients, releasing them for the plant to absorb, and the additional biodiversity creates competition for pathogens, decreasing their chances of infecting the plant. Mycorrhizal fungi live on the roots of other plants, feeding off sugary excretions, but in return, the fungi’s roots serve as extensions of the plant’s own, increasing their reach for nutrients.

Benefits of Compost for Cannabis

Compost can help your grow in a number of ways. Not only as nutrients, but also it can help cut down on costs, while helping to reduce the grow’s carbon footprint.

Compost is a great soil addition for any plant, but cannabis growers in particular will find it saves money across the board from soil volume to nutrient and watering costs. Compost is considered a soil amendment first and a cannabis fertilizer second because pound for pound it has fewer nutrients than concentrated products available at garden stores. But this fluffy loam will improve any soil it’s mixed with. For instance, when added to dry, sandy soils, compost improves water retention and solidifies soil structure. When it’s added to clay soils, compost improves aeration and drainage, and softens the soil for roots to more easily push through.

As plants grow, they extract nutrients from the soil, so growing the same plant out of the same soil repeatedly will drastically deplete those nutrients, leading many growers to buy more fertilizer ad nauseum.

A more beneficial — and far cheaper — solution is to the soil with compost. Not only does compost bring its own nutrients, but the microbial life it introduces will stabilize pH levels and increase nutrient uptake, so resources are more efficiently utilized.

Mycorrhizal fungi in compost can also protect cannabis plants against parasitic nematodes that would otherwise destroy root systems by feeding on them. Fungal filaments called mycelium that grow around roots actually block these nematodes from accessing it. Note: when trying to cultivate mycorrhizal fungus, do not till your soil. Mixing up the soil will destroy any established networks of mycorrhizal mycelium.

How to Make Compost

Composting can be done from backyards bins to countertop Tupperware. Outdoor bins are unlikely to attract pests, and shouldn’t smell if done properly. All that microbial life needs warmth and moisture just like we do, so select a spot that’s uncovered for rain, but still shaded so it doesn’t dry out in the heat. If a compost pile dries out, it will need to be watered to continue the decomposition process.

What Can be Composted

Compost is made by mixing or layering two kinds of organic waste: browns and greens. Browns are dried matter like fallen leaves, straw, sawdust, even paper. Greens are the wet matter like fruit and veggie scraps, coffee grounds, and garden trimmings. A ratio of about 3:1 brown to green is usually recommended, but this is not a strict rule. When the pile looks too wet or smelly, add some dry material; and when it’s dry, add more wet material. The more cardinal sin is adding material that should not be composted.

What Cannot be Composted

Thankfully, just about everything associated with cannabis is safe to compost. Cannabis clippings can be recycled, as well as stems, rolling papers, and crutches. And composted ash is a good source of potassium, which keeps plants healthy. Unfortunately, bong water is useless. It’s usually stagnant and full of bacteria that won’t be good for anything, so it can go down the drain. 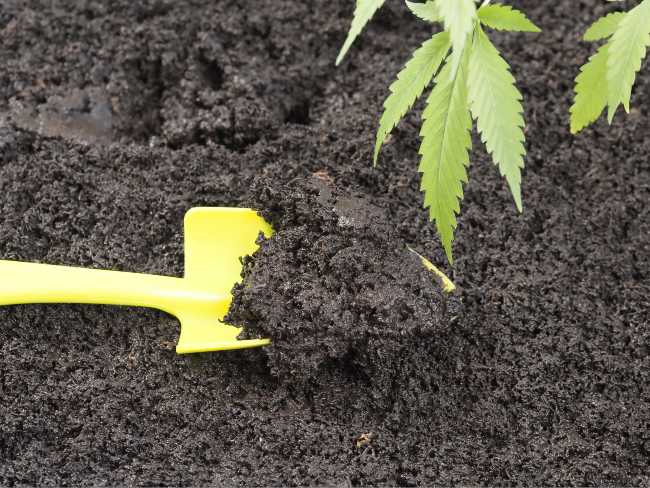 Q-tips touched with concentrate, such as those used to clean a dab rig, may be composted at the user’s own risk. One of the reasons oils and fats are not composted is that they may attract vermin, and rot with a foul smell. But cannabis oil is an organic resin that will probably compost fine, albeit slowly. However, many of these oils are extracted with solvents which may be introduced to your compost, compromising the organic integrity of the whole. Growers can assess for themselves the risk-reward of reducing available waste while breaking the compost law.

How to Make Compost Tea

Compost can also be used to brew compost tea. When compost is left to steep, much of the nutrients leach into the water which can then be used to feed plants, or applied as a foliar spray. To make compost tea, fill a mesh bag (400 microns or smaller) with compost and set it to soak in a 5 gal bucket with an aquarium bubbler or similar aeration system. Leave the mixture for 1-2 days; any longer than this and the extracted microbes will begin to starve. Remove the compost like a tea bag and recycle it back into the compost pile. The remaining water is Actively Aerated Compost Tea (AACT). Note: this same process without aeration will result in anaerobic compost tea, full of microbes that produce alcohol or acetone, which are not beneficial for plants.

Can I use compost to grow cannabis?

Compost is primarily a soil amendment that will improve the structure, water retention, and biodiversity of the soil. But it is also rich with micronutrients and some macronutrients that will feed your plant.

What kind of compost is good for cannabis?

Any compost is good for cannabis, but the best will always be comprised of a variety of organic material. Composts made from single sources like manure or mushrooms will still bring valuable structure and microbial life, but less diverse nutrients.

What does a cannabis plant need to survive?

A healthy cannabis plant requires light, water, and a grow medium rich in nitrogen, phosphorus, and potassium; and micronutrients including calcium and iron.

How do you use compost for your cannabis plants? What other cannabis material do you compost? Continue the conversation in the comments below!

Canafarma Rising Above the CBD Competition With Novel…