As legalization spreads, the market for cannabis edibles has widened to make room for niche groups like those with dietary restrictions, including vegetarians and vegans. But while all vegans appreciate animal-free options, most vegans would agree that not all of those options are equal — we’ve all had a dry vegan cookie, or funky vegan chocolate. Vegans need not sacrifice quality if they know where to look.

In this article, we review our favorite vegan edibles currently on the market.

What Are Vegan Edibles?

For the uninitiated, vegan foods are foods that contain no ingredients made of or derived from animals. The latter part is what makes it distinct from vegetarianism. Vegetarians do not eat foods containing animals, such as meat, poultry, or fish, however many still consume foods that contain ingredients derived from animals such as butter or cheese. Vegans abstain from these foods as well, thus vegan food does not have any milk, butter, cheese, whey, or eggs. Any of these ingredients that are in vegan food have been substituted with a similar non-animal-based version, such as almond milk or cashew cheese.

Edibles in the list below follow the guidelines of veganism, and do not contain any animal products. However, if you follow a vegan diet, be sure to double-check the ingredients, as some may change over time, and certain flavors/preparations may not be as vegan as others made by the same company.

Verdelux is based in Washington state and specializes in premium edibles. Be warned that not all of their products are vegan, but their Illuminations hard candies are. Illuminations come in eight different flavors including a lemon with CBD. If you prefer chocolate, Verdelux hasn’t forgotten about you. Their dark chocolate truffles are also available for vegans, swapping cow’s milk for coconut without sacrificing texture. 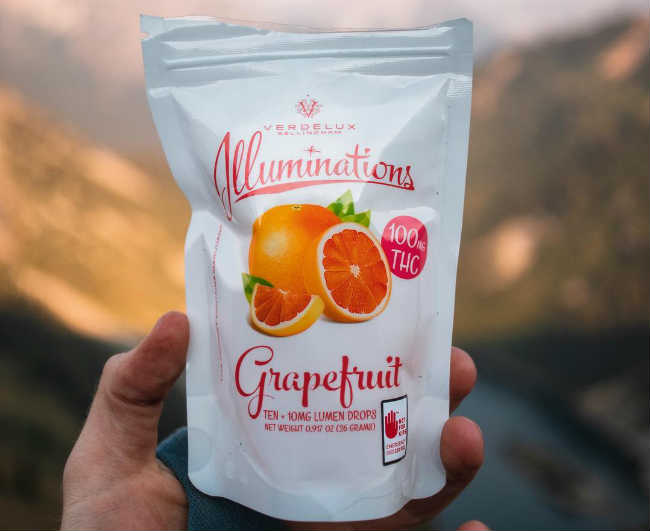 The dark chocolate truffles are 10 mg each of THC and CBD, and the hard candies are 10 mg THC.

The Lost Farm gummies are vegan-friendly, using pectin instead of gelatin (however, read carefully, because the Camino gummies are not vegan). The Petra mints are also vegan, and available in 7 flavors, including CBN and CBD blends. And the espresso bean Terra Bites are vegan, but the other flavors use milk chocolate.

Every gummy, mint, and bite is clearly portioned with 5mg THC per serving, so users with higher tolerance may find themselves eating two or three servings at a time, but no one need fear an accidentally heavy dose.

Utopia scores big with their famous vegan macaroons, which have won medals at the Santa Cruz Cup and the Emerald Cup, and in 2016 their CBD edible placed second at the High Times Medical Cup. They are available in five flavors including raspberry and peanut butter, and are infused with organic, indoor-grown cannabis. 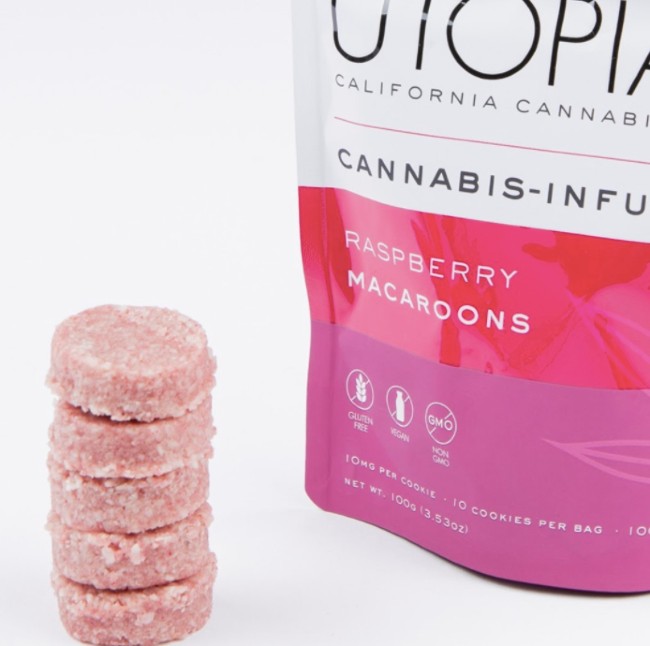 Each pack contains 4 macaroons containing 50mg of THC each. Remember, the commonly recognized serving size is 10mg THC, so at $20 per bag, you’re paying a mere dollar for every 10mg.

VCC sprouted in California in 2008 and quickly gained fame for their unique vegan snacks, including THC-infused pretzels. Unfortunately, the pretzels have been retired, along with some classic cookie flavors, but two vegan options still remain, and are still delicious: the churro CBD blend, and a dark chocolate 2:1.

VCC also offers a line of flavored drink concentrates called Cannabis Quenchers, which come in over a dozen different flavors including a CBN sleep formula, and can be added to any drink.

Wana has been a Colorado staple since 2010, and they have since expanded into 12 states and Canada. All of Wana’s gummies and tart candies are vegan and gluten-free, and they come in single flavors or variety packs. Each edible is a manageable 10 mg of THC. 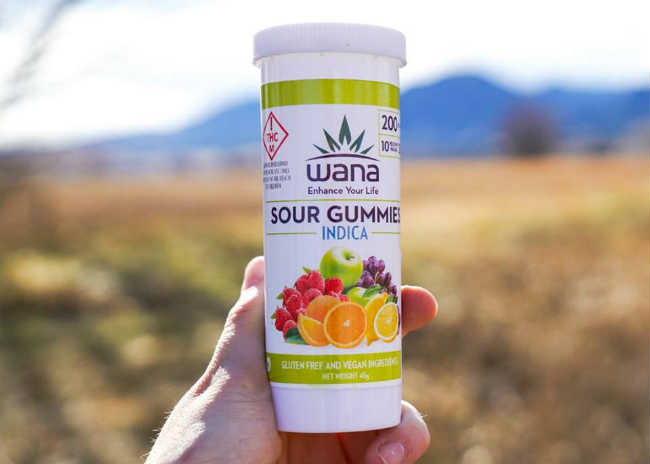 Wana is also in the process of updating their recipes to be organic. Currently, Wana’s products in Colorado use organic sugar and tapioca syrup instead of high-fructose corn syrup, and while they are in the process of introducing these ingredients across all state markets, some products may still use older recipes, so be sure to check the label in your state to see if it’s organic. All gummies are still vegan.

Dr. Raw doesn’t offer as wide a variety as some other brands on this list, in part because the only edibles they make are their hardy candy hearts. And those hearts only come in three flavors, one of which is ominously described as “fruit-based.” Fortunately, these candy hearts are all they need to score on our list. These little lozenges are delicious and animal-friendly.

Each flavor is a THC:CBD ratio, which further limits your options if you only want a high-THC edible (that would be the fruit-based option, mostly pomegranate and mango). The high-CBD option is pineapple, and the even split is butterscotch maple.

Each lozenge still only contain 10 mg of cannabinoids, so dosing is easy

Founded in 2010, IncrEdibles were among the first to clearly mark the doses on their chocolate bars, branding themselves, “the credible edible.” Since then, they have earned multiple awards for their chocolate bars, which are unfortunately not vegan, nor are their gummies which use animal-derived gelatin 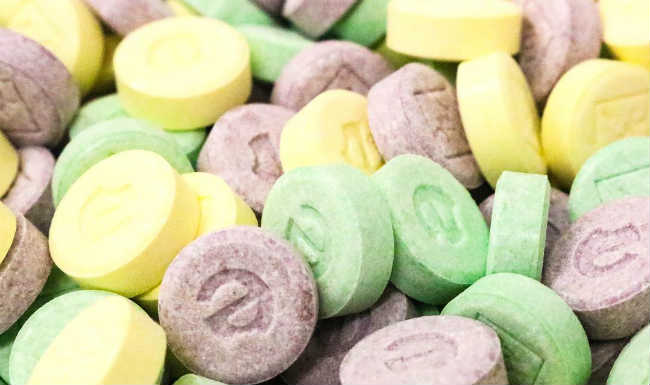 The IncrEdibles brand lands on our list for their mints and their fruit trio chewables, which are micro-dosed at 2mg THC apiece. This versatility allows for easy half doses (or one-and-a-half doses), and allows users a less staggering rise and fall from their edible experience. If you just need a little lift, or some fresh breath without lifting off, IncrEdibles has you covered.

Unfortunately, vegan chocolate is still rare in cannabis markets, but mints and gummies are more widely available than ever. And as the market matures, a number of dietary-conscious and health-conscious products are expected to appear.

Are there vegan edible gummies?

Yes! Wana, and The Lost Farm both offer some vegan gummies we like.

What makes something vegan?

A vegan product is a product made without any animal product like meat, fur, or leather, as well as any byproduct like milk, cheese, or eggs.

What are your favorite vegan edibles? Join the conversation in the comments!