7 Halloween Treats for Your Next Munchie Attack | PotGuide.com


Halloween approaches, and with it, the season of spooky, sensational snacks. But if you spent all your time on your costume, fear not, PotGuide has you covered. Here are some easy Halloween treat ideas that will turn your party into a graveyard smash, or for when those munchie cravings come on in a flash. 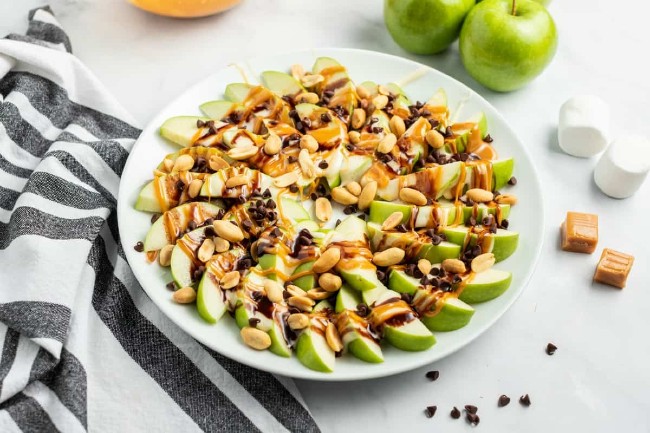 You don’t have to wait for Halloween to enjoy this seasonal snack, but these caramel apple nachos will make a killer addition to any party. Slice a few apples of your choice into thin, crisp slices, and fan them out on a platter. Then top them with pretzels and Reese’s (minis, pieces, or crumbled cups), and drizzle with caramel sauce and white chocolate. BONUS: if you want to lean into the peanut butter and chocolate topping, we also love this recipe for Reese’s nachos with graham crackers and marshmallows.

Trash bark is great for anyone who needs to throw together a quick party platter. It’s also the perfect recipe if you have a little bit of a lot of snacks left. Simply melt some baking chocolate in a microwavable dish, stir in as much peanut butter as you like, then empty the last of any pretzels, potato chips, M&Ms, candy corn, and really anything else you like on top of it. Toss it in the fridge to harden, and you’ve turned trash into treasure. 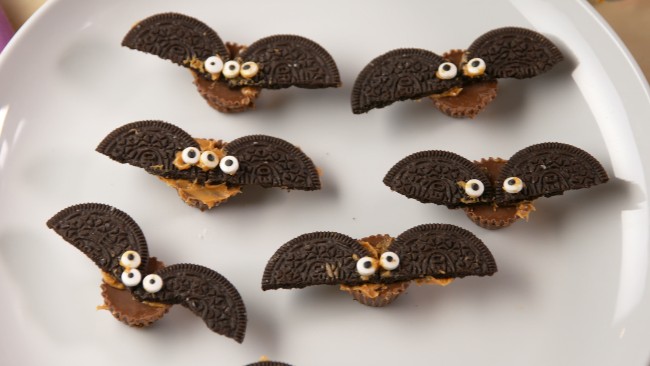 Tired of peanut butter and chocolate yet? Neither are we! These Reese’s bats are a great bite for parties, and are dead easy to make. All you need are Oreos, Reese’s minis, and a little peanut butter to stick it all together. Most of us don’t have candy eyes lying around, but they aren’t too hard to find this time of year.

“I See You” Snack Mix (gluten-free)

This Halloween twist on popular puppy chow will be a hit at a party or among just a few folks at home, and it’s gluten-free! It starts with Rice Chex cereal that gets rolled in butter, almond butter, and melted chocolate. Those pieces are then shaken in a bag with sugar (the perfect job for any little helpers in your kitchen), and are then mixed with more chocolate and candy eyes for the snack that looks back. 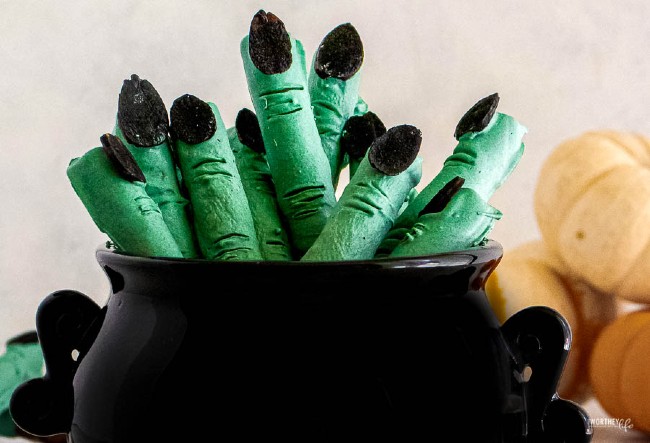 Witch finger pretzels may not be new to many readers, but they’re so easy to make, and so satisfyingly salty and crunchy, that we couldn’t exclude them. Just melt some white chocolate with green food coloring, and dip or roll pretzel rods until they are covered except for a small handle at the bottom. Then let them cool for about 10 minutes on parchment paper, and top with a sliced almond for the fingernail. Knuckles are then traced in with a toothpick.

These party snacks take a little more preparation than some other items here, but they may also get the biggest reaction from your friends. Deviled egg eyeballs begin similar to regular hard boiled eggs, peeled and halved. But then beet puree is mixed into the yolk for the bloody color and veins. A slice of black olive makes the pupil, filled with a drop of hot sauce for one last kick. 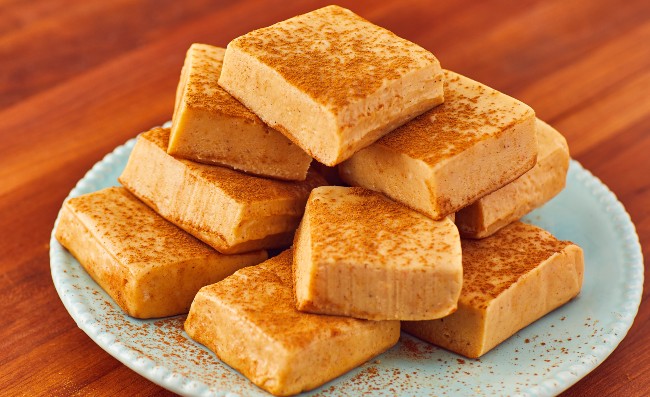 Pumpkin fudge takes a few hours to set, but the prep is easy enough for most of us. White chocolate and sweetened condensed milk form the base, which pumpkin puree is then folded into, along with pumpkin spice, vanilla, and a pinch of salt. Once that’s all mixed, it goes in the fridge for three hours to set. Keep some pumpkin spice to dust over the top, slice, and serve.

None of the recipes included here contain cannabis, but that doesn’t mean they can’t. If you’d like to concoct your own edible treats, some of the ingredients included here, particularly butter, can be substituted for cannabis-infused alternatives. See our guide here for how to make cannabis butter.

And while we didn’t include any gummies on this list, you can absolutely make your own infused gummies at home, including vegan cannabis gummies.

Do you have a favorite Halloween snack? Let us know in the comments below!

Cannabis Flower Most Popular Form of Consumption in Colorado |

International Drug Treaties That Ban Marijuana – Do They…

Magic Mushroom Tourism and Vacations – The 5 Best Places to…

CBG the mother of all cannabinoids (EDUCATIONAL!)

Joel Stanley, Of Stanley Brothers: How I Learned The Truth…

What if We Treated Cannabis Protests like the Freedom…