Weed and Working Out | PotGuide.com


As the nation comes to terms with the multitude of medicinal applications of cannabis, it should come as no surprise that athletes, physical therapists, and sports medicine specialists are adding their voices to the chorus of those praising marijuana and exercise. So Dr. Angela Bryan, a professor of psychology and neuroscience at UC Boulder, wanted to know more about the burgeoning relationship between cannabis and exercise.

Dr. Bryan and her team conducted a survey of 600 cannabis users in states where adult-use is legal, asking how they work out with weed. The researchers found that more than 80% responded that they used cannabis an hour before or within four hours after working out. They reported a range of benefits from focus to recovery, but maybe more importantly, 70% of those surveyed reported that it made their exercise experience more enjoyable.

Regardless of the performance, the positive feelings associated with the workout can be enough to bring people back to the next day. Bryan’s data showed that people who used cannabis in conjunction with exercise (co-users) spent more minutes exercising per week than those who did not combine the two, suggesting that cannabis is a great tool for overcoming the mental resistance associated with exercise. After all, it’s not exactly a performance-enhancing drug. Is it?

How Are People Using Cannabis With Exercise?

“The benefit of being high is you’re more in tune with your body. It keeps you more alert and aware.” That’s Ultrarunner Avery Collins talking to SBNation. Collins is a co-user and cannabis advocate who credits cannabis with helping him train to win hundred-mile races. But let’s be clear: Collins does not race high.

The World Anti-Doping Agency still declares THC a performance-enhancing drug for it’s perceived ability to reduce distraction and anxiety – two factors WADA believes the athlete must overcome internally, without the aid of a drug. Although there is no clinical literature proving the focus-enhancing effects of cannabis, the effects are deemed real enough by the councils who decide such things. CBD, however, is very much allowed by WADA. 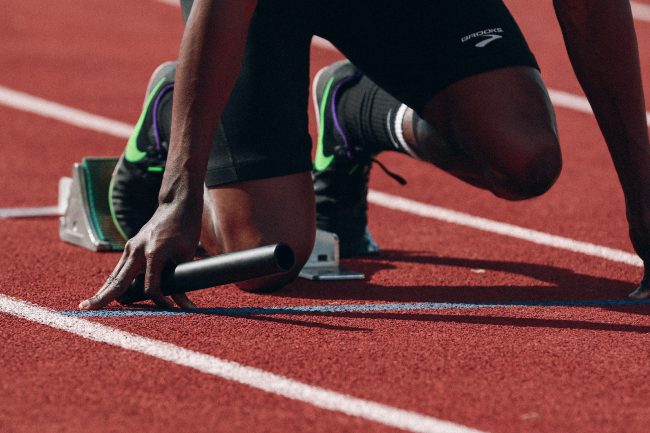 “It doesn’t take much digging into studies to find that cannabis’ compounds are anti-inflammatory, stress-reducing, antioxidative, and pain mediating, to name just a few benefits,” says trainer Zach Scioli. CBD in particular is becoming a more popular recovery aid, as the cannabinoids offer relief from the swelling and sore muscles that follow a workout. Specific muscles may be targeted with topical balms. More athletes recovering from injury are also turning to CBD for pain management as well.

But what about this mental edge that crosses the line into cheating? “Using weed before a workout is a great way to get out of your head about what’s to come,” says yoga teacher and writer Jessamyn Stanley. She told Bustle last year, “Instead of wanting the workout to end, I have to remind myself to stop.”

Stacey Mulvey, founder of Marijuasana “infused yoga,” suggests that as the endocannabinoid system regulates homeostasis in the body, then cannabis is a welcome ingredient – if not participant – in yogic practice. “With yoga, when we are practicing and we start to feel blissful or calm, like that feeling we get when we are into that flow state, that’s the endocannabinoid system that you’re feeling on a physical level.” And the relationship between these feelings may be more than hearsay. 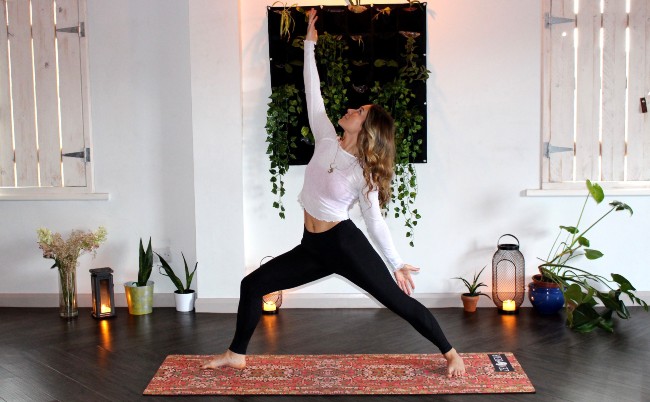 Many people have started to incorporate cannabis into their yoga practice in order to reach a deeper level of relaxation. photo credit

A 2003 study suggests the fabled “runner’s high” – the euphoric flow state reached after a duration of exercise – may actually originate from the endocannabinoid system, not from endorphins interacting with opioid receptors, as previously thought. If that is the case, then cannabis may be naturally designed to induce the euphoria that invites further exercise.

Of course, there is no perfect medicine, and combining cannabis with exercise may carry risks for some users. Smoking cannabis is known to elevate heart rate and blood pressure, which should be noted by those with existing heart conditions. And sedative effects may actually reduce motivation and reaction times. Consider (or discover) which activities and strains pair well, and keep your lungs clear if you can.

There is still little peer-reviewed research on the relationship between cannabis and exercise, but the mosaic of existing research and anecdotal evidence begins to form a compelling narrative, one that obliterates the decades-old derision of the “lazy stoner.”

Cannabis will have sedative or intoxicating effects on some users, in some doses, but for users who do want to add cannabis to their clutch of supplements, the word of the day is “titration.” Find the smallest amount of cannabis you need to achieve whatever effect you’re looking for in your workout. Even Avery Collins supports “responsible consumption,” using just enough to achieve your desired effect, whether it’s letting go of distraction to achieve focus and presence, or overcoming the resistance to simply begin.

Cannabis may not give every athlete a competitive edge, but it can give many of us the opportunity to embrace and enjoy our workouts.

How do you use cannabis in your workout routine? Tell all about it in the comments!

The Best Cannabis Strains for Focus and Clarity | PotGuide.com

How to Tell if Your Cannabis Has Gone Bad and Its Side Effects | PotGuide.com

CBD Cosmetics: What to Look For | PotGuide.com