There’s something about purple weed that just makes it seem…better. It’s not just the color, which can be an exotic, deep violet floating amongst a sea of green nugs on your local dispensary’s shelves. It’s that purple weed seems almost mythical, so much so that the color is a major selling point for the strain itself. Names such as Grand Daddy Purps, Purple Urkel, and Purple Dragon are a draw for cannabis consumers looking for something dank, powerful, and potent.

But is there anything actually special about purple weed that sets it apart from its iconic green brethren? Does that enticing lilac color signal that some special trick of cannabis chemistry is going on inside those trichomes? Is purple weed really better, stronger, and doper than green flower? Or is that remarkable purple color just a different shade of the same genetics, like a black panther or a white tiger?

First off, any talk about purple weed versus green weed is really a talk about flavonoids, which are what make the buds of a strain like Grand Daddy Purps so…purp. Flavonoids are one of the two hundred chemical compounds that have been found in weed so far (although to be clear they are not specific to cannabis and exist in all plants). While they are not nearly as well studied as cannabinoids like THC and CBD, or terpenes like pinene and limonene, flavonoids are known to serve several functions in cannabis.

The main function of flavonoids is expressing the plant’s different pigments (the “flavon” in flavonoid is Latin for yellow, though flavonoids appear in a range of colors). Beyond that, flavonoids help to protect the cannabis plant from pests, disease, and harmful UV rays. Further studies have also shown that flavonoids work synergistically with the terpenes to express the taste and smell of each essential oil. 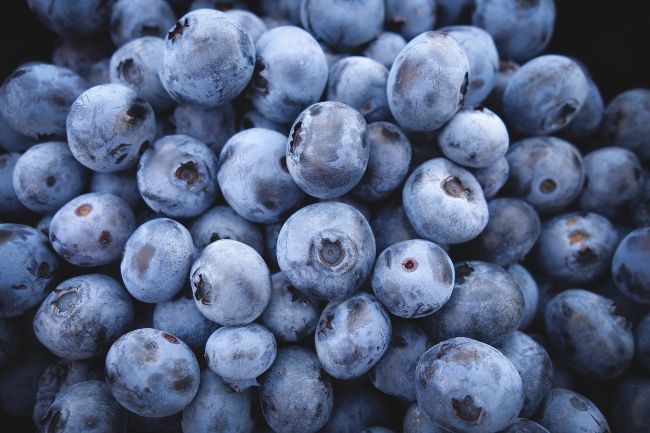 The flavonoid anthocyanin is responsible for giving both cannabis and blueberries their purple pigmentation. photo credit

In purple weed strains, the flavonoid giving those nugs their regal color is called anthocyanin. In fruits, anthocyanin is what turns raspberries their ruby red and gives blueberries their namesake color. In bud, anthocyanin is responsible for turning strains like Purple Urkle that deep shade of violet that makes it look like it ate the wrong gum at Willy Wonka’s factory.

Fun Fact: The “cyan” in anthocyanin refers to that greenish-blue color that’s possibly best known as one of the main ink cartridges in a color printer. It’s the “C” in the CMYK color model. You know, the one that always seems to run out first, and then your printer won’t work until you replace it, despite the fact that you’re only trying to print a black and white document? That’s Cyan.

So, is anthocyanin some special genetic ingredient that gives purple weed extra flex when it comes to getting you lifted? Is it some kind of suggestive chemical wink at whoever’s looking to smoke it? Are those indigo indicas nature’s way of saying “Stay away from this plant unless you wanna have too much of a good time?” Not exactly.

While some cannabis consumers do report that purple weed strains just hit different, this is most likely a case of priming themselves for an experience based on prior assumptions.

One can’t be blamed for assuming that if they’re advertising a cannabis strain as being a special color, it has to mean there’s something special about the strain itself. The truth is, there are a couple of reasons that a strain turns purple, and none of them have to do specifically with THC content.

What Purple Leaves on Cannabis Mean

As you may have noticed if you’ve ever walked along a forested path on a crisp fall day, leaves don’t stay green all year round. This is because, as the outside air temperature begins to drop, trees start preparing for a couple of months with less sunshine. This means pulling all their useful, sunlight-transforming, green chlorophyll out of their leaves in order to conserve energy for the winter. As the chlorophyll drains out of the leaves, all the reds, oranges, yellows, and other fall colors that are usually masked by chlorophyll get uncovered. 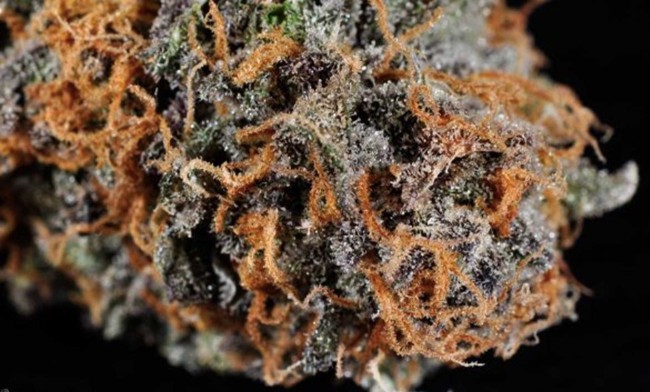 Purple Dragon is one of many strains that get its name from its vibrate, distinguishable color.

Because cannabis is a plant, and all plants have chlorophyll, this same thing can occur. In some strains, as the chlorophyll retreats, the color that’s left is purple. Thus, purple nugs may have less to do with any special genetic mutation giving them extra potency and more to do as a byproduct of a marijuana plant getting chilly.

In this new age of cannabis cultivation, purple coloring has a lot more to do with nurture than nature. Because of purple weed’s novelty, reputation, and bag appeal, there are plenty of growers who are specifically breeding strains that naturally express anthocyanin without any temperature changes. Even with this specialized breeding, purple nugs may not equal the dopest product.

According to some growers, purple strains usually contain less THC than their green brethren. This is due to the strain putting extra resources into expressing the anthocyanin inside their leaves rather than into the trichome production on top of them. On the other hand, a master marijuana grower can overcome purple weed’s energetic handicap. If they know what they’re doing, a grower can still produce some top-notch bud that also looks like what Grimace smokes before his shift at McDonald’s. We’ve all smoked those strains. Because the purple color is a selling point, some growers have focused on breeding specifically strong purple strains.

Besides the talent of the grower, there’s nothing inherent in purple bud that sets it apart from other strains.

On an even playing field, a well-grown strain of Bruce Banner will usually smash its Thanos-hued competitors. This is not to discount anyone’s tastes.  Some individual cannabis consumers may find that purple strains hit them the best due to the complex interactions between the genetics of a strain and everyone’s different body chemistry. You can chalk it up to the magic of weed. But on the whole, purple strains are going to be more of a visual selling point than an experiential one.

When it comes to the color of your weed, whether it’s Purple Urkle, Golden Goat, Pink Flower Shaman, or Green Crack, it really is what’s inside that counts. Specifically, what’s inside those crystally trichomes that are covering the leaves (whatever color those leaves happen to be.) Everyone likes pulling out some exotic nug from the bag to show to friends or load into a bowl. However, the best way to find the dankest nug isn’t the color, but the smell and texture.

Is the nug springy with some give? That means it was well cured. Is the coating sugary? That means there’s plenty of rich trichomes chock full of THC. Does it smell like a forest in paradise? Then those terpenes are gonna be the ones for you. However, if your friend or budtender tells you a strain of purple is the dankest, it never hurts to give it a try.

Do you notice a difference in purple weed? Share your experiences in the comments!

CannaBiz California: Survive, thrive, and compete as a cannabis entrepreneur.

CARNIVAL SCAM SCIENCE- and how to win

What is Cannabidiol oil? What are the effects of CBD oil? Is…